There are a huge number of different valves that exist, and each one has it’s own particular application and purpose.

What Are P&ID Symbols?

P&ID stands for piping and instrumentation diagram. They are commonly used in process industries, such as oil & gas, paper production, wastewater treatment, etc. to map out their processes in a systematic way. P&ID symbols are shapes in these diagrams that specify certain mechanical components in the process. There are symbols for every possible component in these processes, such as valves (which we cover here), reactors, drums, centrifuges, sensors,  electrical components, flow direction, heat tracing, and many others.

Gate valves are a simpler type of valve that is extremely common in industry. The consist of a flat fluid barrier that is slide into and out of place. One reason they are used is that they don’t take up much space in the process line. They are typically only used in an “on/off” manner, either fully open or fully closed. They are also mostly used for large pipe diameters.

Globe valves, which are not ball valves,  are mainly used to regulate flow. Their name from their exterior’s typically round shape, although newer globe valves do not always have a round exterior. They consist of a plane that is horizontal with respect to the pipeline. This plane will have an orifice. A plug of some form being lowered into this orifice is how flow is regulated.

Ball valves consist of a solid sphere with a hole through its center that is typically the same diameter as the pipeline it is installed in. It is open and closed by turning the sphere a quarter turn. Like gate valves, they are usually used either fully open or fully closed. They are very robust and reliable, so they are often favored over other types of valves. They are useful in situations where other types might freeze.

Plug valves are similar to ball valves. Instead of being a sphere with a circular hole through the middle, they are a cylinder with a rounded rectangular hole though the center. They are also typically used either fully open of fully closed. Stopcocks (used often in laboratory glassware) are an example of a plug valve. Another common application is for the shutoff valve in a household natural gas line.

Butterfly valves consist of a disk positioned in the center of a pipe that either stops or allows flow when rotated only a quarter turn. They operate similarly to a ball valve, but are less expensive and lighter weight. Their main drawback is that the disk in the center is never fully removed from the fluid flow, making them unusable in applications where “pigging” of the pipeline is required. Pigging is when solid material, like foam, is pushed through the pipeline, usually to clean is out or to separate fluids that can not touch.

A diaphragm valve consists of a diaphragm, typically made of a rubber, positioned in a hole in the side of a pipeline. In the open position, it does not impede the flow of the fluid at all. To close is, pressure is applied to the back of the diaphragm until it full impedes flow. Weir-type diaphragm valves are often used in throttling applications. They are also used in application where speed of operation is important.

Check valves are are designed to only allow flow in one direction. Whether they are opened or closed is determined by the difference in pressure (and the direction of that difference) on each side of the valve, instead of being manually opened or closed like every other one on this list so far. There are also many different possible designs for this valve, although they all operate using the same basic concept.

Relief valves (also called safety valves) are very important to have in almost any process. They are designed to open and lower the pressure in any system they are attached to. They do this to keep then system from over-pressuring, which could potentially damage the system, cause leaks, or even an dangerous explosive rupture of a pipe or vessel. Early boilers often did not include a safety valve, and where prone to explosions if not carefully monitored and controlled. 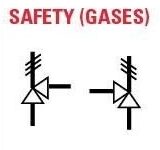 Daley Automation is a collection of independent companies and capabilities dating back to 1909, that in September 2020, integrated into one organization resulting in a company providing a variety of products, equipment and engineering services that supports both the industrial process and industrial manufacturing industry. Learn more about our philosophy and values below.

Daley Automation is a collection of independent companies and capabilities dating back to 1909, that in September 2020, integrated into one organization.